Ask: I am researching how to build a version of the Stanford 2020 fund. Read more here and here. The biggest blocker I am identifying is access to a sufficiently skilled lawyer who can emulate what Stanford's legal fund was able to do. Do you know a lawyer who can help? If so, drop a comment or send me a note at mail@muhanzhang.com.

To read on Medium, click here. Prose aside, poetry below:

On calls that I have with premium subscribers, I often joke that I have the most preposterous job ever. Great people, with healthy wallets, pay me, to meet other great people, with equally healthy wallets, and give my $0.02 on outlandish proposals to build the future. Most proposals will then return pennies on the dollar back on the initial investment, while a few of these proposals' founders will go down as the "Great People who Built America" (e.g. Cornelius Vanderbilt, John D. Rockefeller, Andrew Carnegie, J.P. Morgan and Henry Ford of the 21st century. That's another bit of history I have to go read up on.)

We're at a strange time in history (as we always are?) The costs of founding a business have gone down exponentially. Need to incorporate? LegalZoom for a few hundred dollars. Need to set up a website? Squarespace/Mailchimp/and even Bubble for full SaaS apps, $12-$25/mth. Payments? Stripe with no down payment. Productivity suite like calendar, email, video call, and documents? Google Apps Standard is $6/mth. All this is to say, you could easily start a business comfortably under $1k, and if your business is just starting off, you don't even need to incorporate. Just file a 1040 misc income addendum.

Conversely, the cost of funding is a business is only starting to go down now. Up until the last half decade, to start investing in private enterprise required you to start with $1m in net worth not including your primary home. First you had the JOBS act allowing for investment up to $2X00/mth for unaccredited investors, then the lower of minimums via equity crowdfunding campaigns, then the SEC started expanding the definition of "accredited" investors as a function of wealth and knowledge, and just recently the SEC has quintupled (yuge deal) the amount of capital a startup can raise from unaccredited investors from $1m to $5m.

Finally, in July of this year, a group of broke angels (in other words, what I affectionately call the poor of the rich and the rich of the poor, people who aren't quite accredited but have enormous odds of becoming so in their lifetimes,) figured out how to make their big brand-name MBA brains turn into financial equity. By finding the needle-in-a-haystack law firm through their connections, they were able to raise a $1.5m fund across 175 investors, each chipping in a minimum of $3000. Yuge deal. Only limitations are that Stanford's 2020 Fund will only invest in graduates of the class, and won't lead investments (the Fund's GP's are not trying to run this as a full-time job.)

Can any random group of people come together and form an investment club? I'm not sure. My feelings on the SEC regulation is that they are increasingly opting towards allowing small groups of citizens form these investment vehicles, but with the caveat that it can't be a free for all. Each group must have bylaws, governance, and some kind of credentials (regulated or not) to make such volatile investments. The SEC's expansion of accredited only meant that, now, finance professionals with certificates could now invest in what their full time job exposed them to. Stanford is making the argument that since they're all MBA grads, they have a valid certification equal to a regulation 7, 65, or 82 to invest. This all begs the question: if actors, musicians, and athletes are starting funds (because merely owning sports team is so passé) at the same time that grad students are dabbling in funding the future, what comes next?

The very first angel investment I made was WhereBy.Us. At the time, I didn't know to look at a startup's financial statements, never mind finding it. I made a purely personal bet: I worked in startups in Miami, every young professional subscribed to WhereBy.Us' The New Tropic, and so I wanted to back the hometeam by putting my money where my mouth is. Three years later, Jason Calacanis has invested, they participated in LAUNCH, and have tripled in valuation. This type of informal knowledge and expertise is very akin to what Peter Lynch espoused, applied to startups.

Thesis: this will be the decade of self-organized community funds, converting their informal knowledge (aka street smarts) into formal financial stakes

Stanford MBAs don't have to look at any spreadsheets to evaluate founders—they outsource the boring stuff to other VCs and make judgments purely off of having gone through two years of school together. 16th century Korean farming villages joined together monthly to fund each others' businesses. Even my mother participated in something called 凑份子 back in the factory days of 1970s China. As capitalism progresses and safe yields disappear, combined with the increasing societal fraying, the appetite for private returns, informed by trust, authenticity, and personal knowledge, will increase.

Imagine a world where the Navajo Nation sovereign wealth fund starts a VC arm to invest in founders from their community/products that serve the community, or teachers/school administrators funding EdTech startups, or citizens of a city funding hometown heroes and startups on their quest for scale. Just as software eats the world, the abundant future is everyone and their auntie becoming an angel investor (or adjacent.) A VC fund for every moon would allow more products, solving real problems, with community skin-in-the-game to support the companies and ultimately back more potential founders from every walk of life.

To that end, if you are/know a sufficiently skilled lawyer who can emulate what Stanford's legal fund was able to do, drop a comment or send me a note at mail@muhanzhang.com!

Robotics startup with security bots looking like R2D2 wants to raise $25m on a $447m valuation to roll out omnipresent big brother police bots. Has product in the revenue, though growth stagnant. Fascinating peek into the market of innovation in law enforcement. 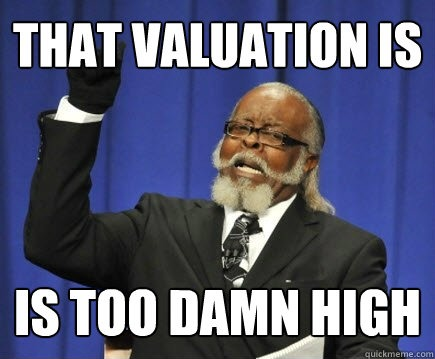 This is a series of premium posts I wrote for paying subscribers to the Startup Investing for All community. These posts were originally hosted on Buy Me A Coffee from my original tech stack. Originally posted August 31st, 2020.